Friday  Service 284  to Llandeilo then 278 to Ammanford

Even though the services are infrequent you can use the bus services to explore parts of the locality and further afield:

Carmarthen; Wednesday and Saturday – up to 3 hours in the town

Ammanford; Friday – up to 2 hours in the town

Llandeilo; Friday – up to 3 hours in town

Llansawel; Abergorlech and Brechfa,(Wednesday and Saturday) have a walk around the areas or between the villages and enjoy a lunch at The Black Lion (in Abergorlech or Brechfa) or the Forest Arms in Brechfa – do check the pubs for their opening times. 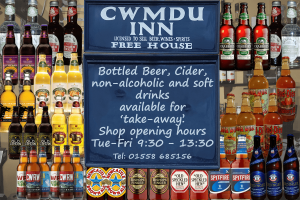 Saturday dining or take-away. Indoor restaurant and in the garden - check for details